Sensory Processing Disorder (SPD) is a tricky diagnosis to have. For one, the medical community (the DSM) doesn’t recognize it as a stand alone diagnosis although many children have it without any other co-morbidities. It can also go with Autism Spectrum Disorder (ASD), ADHD, or other Learning Disabilities (LD) as a symptom of these disorders, and many times SPD’s behaviors can look just like behaviors for ASD, ADHD or LD. In our case right now we are playing the waiting game. Many of Molly’s behaviors could be plain SPD or depending on how she develops there is a possibility of ASD. Now the problem is when you have to wait you have time to observe. And if you observe with knowledge you notice EVERYTHING. It’s like going to webMD to research why you have a headache. In 10 minutes you think you have brain tumor. Same thing when observing your possibly autistic child. It’s even worse when you have a “normal” child. I find myself comparing their language skills constantly. Charlie who has only been talking for 3 months seems to have more functional language than Molly who has been talking for 3 years. But that’s not what gets me. It’s her parroting that alarms me. She repeats phrases, changes her tones and imitates her friends or TV characters. She has the same conversation with her imaginary friend over and over again in different situations and she says appropriate things at appropriate times that are always the same utterances. The other night she had an entire conversation with me about her Leapster quoting her Leapster. That’s when I realized- she’s not autistic, she’s ME!

My ability to carry on conversations made up entirely of TV or movie quotes is only inferior to one other person I know, my brother. For as long as I can remember the majority of mine and my brother’s conversations will include quoting and often the conversation will be entirely quotes. Barely ever do we make up our own jokes, we just parrot others. Somehow the movie Major League is appropriate to quote no matter subject you are talking about (Airplane! is also very quotable).  This skill also baffles my husband who half the time has no idea what we are talking about because the quotes can be out of context to anyone that hasn’t memorized entire movies. For some reason, that seems to only entice our quoting even more, just so we can laugh with Stampy. (In all fairness, he’s probably laughing with our idiocy). It’s not something we really thought about doing, it just comes out naturally, just like breathing or eating.

I guess you can say that quirky parents create quirky kids. 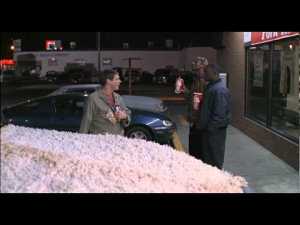