We got off to a rocky start here, the first three weeks I was yelling once a week. Which was down from the three or four times it was. We hit that third week though and everything started to flow. Now about that time it warmed up about 20 degrees, days got longer and we could go outside. Might have had something to do with the change in my mood but either way, week three through six blew on by. I didn’t take those last three weeks basking in the sun though. Nope, we started potty training and we hit both kids’ (and mine) birthdays and two illnesses. We were busy. We were running. We were living.

I thought I would share a point when I noticed my change had occured. It was two days before mine and Molly’s birthday. I was working 9 hours that day, eleven the next and I had a birthday cake to make. Like all five year old girls, Molly wanted a Thomas cake and since Charlie has food allergies, Stampy and I were left to our own devices to make it. Things were going well that day and I had scheduled myself down to the minute. I knew if I could just get the cake in the oven, my mother-in-law could get it out as she was watching the kids. Turns out I had just enough eggs and cocoa to make one cake. I had just enough time to make one cake. ONE.CAKE. Dry ingredients go into the stand mixer and the rest is Charlie history. FYI, if you leave a stool next to the counter and if the stand mixer is near that stool, a three year old might climb on said stool and turn stand mixer to high. 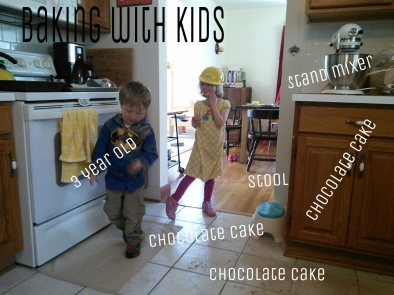 Needless to say my already risen stress level went from 0-60 pretty quickly. Chocolate cake dry ingredients everywhere. Oh, and did I mention the eggs had already gone into the stand mixer?? Yup. My eggs, cocoa and time were now a dust storm all over my kitchen and three year old. He didn’t have much to say for himself other than “I’m covered in flour!”. I realized that I could yell about what just happened or I could accept what life handed me. 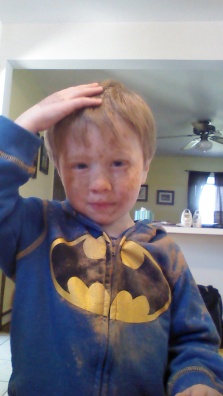 I chose to accept what life handed me (seriously, I couldn’t yell at that cocoa covered face) and with that it handed me two awesome in-laws at that moment. That not only got new ingredients but baked a cake and cleaned my kitchen. Yup, that happened to. I was pretty lucky.

Did I mention we started potty training that little guy?? I’m sure more will come about that later.