She has sensory processing disorder.

She suffers from anxiety.

She has the emotional capability of an 18 month old.

This just tops the list of things we’ve been told about Molly. She has “failed” pretty much every standardized tests for diagnosing any of these conditions.

She doesn’t like loud noises, clothes, food, has balance difficulty. She has sensory processing disorder.

She’s afraid of the dark. She’s afraid of public toilets. She carries on frantically when she doesn’t like something. She gets too nervous about being wrong. It’s anxiety.

The problem is that all of these symptoms overlap in the Venn diagram from hell. They are each part of sensory processing, autism, adjustment disorders and anxiety. So each profession we talk to grabs hold of the symptoms they specialize in and diagnose and suggest treatment for that. Each have compelling arguments why they are right and how their diagnosis would cause the other symptoms and then each are left with a bunch of ??? when Molly doesn’t quite fit their mold. And we are left trying to figure out what to do next.

We’ve had success with therapeutic riding, but not in some main areas.

We had success with behavioral therapy, but as soon as Molly figured out the ropes it was downhill from there.

Sticker charts are useless. She can’t be motivated. Some days to do anything.

Since this summer, we have been heading into the anxiety difficulty. It’s the last piece of the puzzle we really haven’t tackled. We tried once. We did the big name hospital, we weren’t happy. Honestly, it scared me off. It’s a lot of time, energy and resources to go to these appointments. We’ve been blessed with plenty of family and friends who are more than willing to help, but it’s still tiring and at some point leads me to a nervous breakdown after balancing schedules, appointments, work and babysitters. After the first failure we’ve been putting it off, but a recommendation from the school psychologist has me staring at a list of names again. Plain old names. All backgrounds fit what we need, no one seemingly better or worse than another. It’s another shot in the dark to find out what we need and who we need. I sat and stared at these names this morning, trying to pick up the phone to call them and find out if they take our insurance and if they have availability that matches our limited free time, but I didn’t call anyone. Instead I sat and cried. Feeling like I needed a therapist myself, or a personal assistant to make the call so I don’t have to deal with it. I considered hooking my box of wine up to an IV but it was 9 AM and I had a feeling that social workers or counselors don’t appreciate drunk phone calls that early in the morning.

At least my boxed wine is still on sale at the local liquor store. 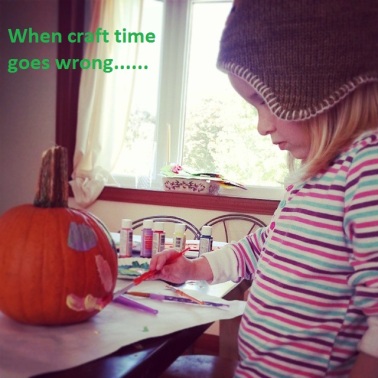 Wow… today was a bit of a doozy. For starters we had a field trip to the pumpkin patch where Molly decided that she was terrified of picnic tables and had me hold her for the next twenty minutes. So, after being exhausted from tending to her all morning I decided for a nice quiet time activity. I’m tired and think I’ve hit the jack pot with a pumpkin painting activity so naturally there were tears (mine) and screaming (hers) and a time out (mine).

Anyone else have their 4 year old send them to a “calm down spot”? No? Oh, well, mine does. Honestly, I don’t mind the couple of minutes of quiet where no one bothers you.

I was super psyched that our social worker was coming today. I was having the internal struggle of meeting Molly’s needs and wants and feeling like I was failing big time at everything. Should I have carried her at the pumpkin patch? Did she really need fresh paints when hers mixed? Should I just have ended craft time before losing my temper??? I needed our counselor to talk me through it and keep me out of the wine. She listened then she questioned “what if this isn’t what a 4 year old should be doing?”.

Oh. Even though I was having some concerns with some behavioral shifts, especially toileting and becoming more and more helpless, and the fact that her teacher had made more than one report home about some difficulty I was still telling myself that Molly was 4 years old. I also knew that in a lot of cases she is on par with Charlie emotionally, but it’s something else when it is put out in the universe. That looming question that I don’t have an answer for because I tend to dance around it on a daily basis. Honestly, I still don’t have an answer for it but I do know that what I have always suspected is right on. So I got over my punch in the stomach (which I asked for) and said “what do we do?”. For now we were given 3 options: do nothing and ride out this school year; have her retested through Child Find; or see the psychiatrist through our youth services bureau. I picked option 4: have our counselor talk with the teacher and observe Molly in class so we could make a more informed decision. Mostly because I don’t want to go through Child Find again and have her not qualify. The testing is long and exhausting for everyone and I can’t put us through that again and have the same outcome. It’s ridiculous.

So, that’s where we stand. Waiting. Waiting for an answer of where to go next. I have a feeling we will often be in this limbo with Molly so I should get used to it.

Today is a Therapy Thursday and that always makes me smile. Before it would make me smile because I really saw the benefits of our behavioral therapy in our day to day lives. We had minimal tantrums and the ones Molly did have were only 10 minutes as opposed to 45 minutes (and who doesn’t love less crying??). Now I love Therapy Thursdays because I get an hour to discuss my parenting/toddler problems to a professional and be told that I’m doing a great job (and who doesn’t love that boost of confidence??).

We are in the minority that does not find out the gender of our children before they are born. Throughout the pregnancy I made the mistake of saying 3 things:

It’s not that I didn’t want a girl, it’s just that I had an older brother and to me it just seemed natural to have a boy and girl in that order. I didn’t want a red head because I didn’t want my child bursting into flames the second she went outside (which red heads tend to do) and I didn’t mind sharing my birthday, I just didn’t want to spend my birthday in labor. In a hospital. In labor. I wanted to put my feet up and have some cake. So on my birthday at 11:11pm, after 26 hours of labor (I guess technically I did put my feet up), came a bright red haired baby girl. Yup. I really should have known from day 1 what we were in store for. 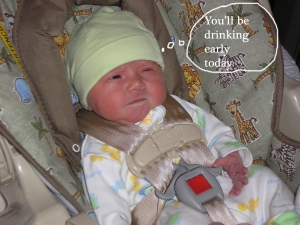 Bringing her home from the hospital we knew we were completely under prepared to take care of a child so when the struggles came, I just assumed it was because I had little idea about what I was doing. I’ve always been more of a “I’ll just wing it person” and I took the same approach to parenting. Naturally when she was colicky, sleep deprived and suffering from acid reflux I handled it like a pro. And when she turned into a tantrum-y 2 year old, I handled it a little less like a pro and when she turned 3, I had a nervous break down. I seriously thought I was a failure at parenting. I couldn’t remain calm during the 7th tantrum of the day like the “professionals” recommended, my child was unhappy, my marriage was suffering, I learned that people that were supposed to love me were calling me “irrational” behind my back, and my nerves were fried. Then, in walked Marie. Our Social Worker from Heaven. I wasn’t crazy and I wasn’t a failure. In fact I was doing quite well since I was still a functioning human being raising a child that was emotionally delayed like Molly. I liked Marie from day 1. Turns out we were raising a 3 1/2 year old that had the executive functioning of an 18 month old and the intelligence of a 5 year old. Apparently that makes for a lot of red flags to go up in the child development world.

Almost a year later we are happy. The stress is still there because, let’s face it, we can’t change who Molly is. We can change how we see her and what our expectations are for her. We are learning to balance what she really needs vs. what she thinks she needs and is trying to manipulate us for. Most importantly, I’ve learned that help is a good thing and that it’s ok if it takes a village to raise your child.